Today in the shower I randomly remembered the last few minutes before surgery when I was high off my rocker.
Now I've been under anesthesia many times. Sometimes I don't remember shit before falling off to sleep. Once I remember the doctors and nurses telling me to count backwards from 10. When I got to zero, they said, "Uhh. Count again." and I don't remember much after that. Other times they knock you out before you even get to the room they're going to use to torture you. I've found that the anesthesiologists generally try to have a conversation with you about random topics; what you do for a living or which one of your family members is waiting for you. They also LOVE to bragabout how "happy hour is about to start" or they'll make a lame joke, "Be nice to me. I'm the one with the drugs" It's all in an attempt to keep you talking so they can definitively tell when you're out of it when, say, you trail off to sleep mid-sentence.

Ok, so I was in the shower today and I remembered what the anesthesiologist was talking to me about before surgery. All of the nurses or whomever is in the room at that point, kept asking me about my "happy place". Yes. They actually used that phrase.
Now, to me, telling someone my "happy place" makes me want to laugh because its just...corny. So the first thing I thought of wastelling them my happy place was at home on my couch watching TV. Apparently this wasn't good enough for them as they insisted my happy place had to be a beach. So I started telling them my happy place was a beach in Florida that I had just visited for the first time this year. They were asking me more questions like the name of the beach and where in Florida it was located and I remember being extremely vague and the more vague I was, the more they prodded me for details.
In the end, I guess they got what they wanted. I ended up telling them about my trip to Clearwater by myself this past year and how I took a ferry out to Caladesi Island. I told them how the beach was ranked the #1 beach in the US in 2008 and that I sat under an umbrella all day reading a book. For some reason the whole time I felt so foolish telling this story, probably because of their ridiculous oohing and aahing. Then I don't remember anything. But why couldn't they just let me tell them about how wonderful my couch is? I could definitely talk longer about my couch.
I don't know why I'm telling this story but I figured it was the best way to share some of these pictures from the hospital. They aren't glamorous nor that amusing.
This is what you might look like an hour after a proctocolectomy: 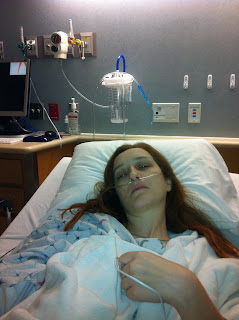 Finally in my room, I think I was just high here. Hence not appearing to be in a deep sleep yet having my eyes closed. The girl who came by my room every morning to draw my blood always laughed because I was burrowed into that corner of the bed the every time.

And this one. Oh my...I don't know if I was screwing around with my mom or actually THAT out of it but it's hilarious either way. 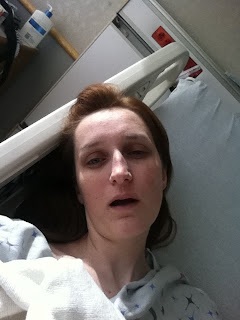