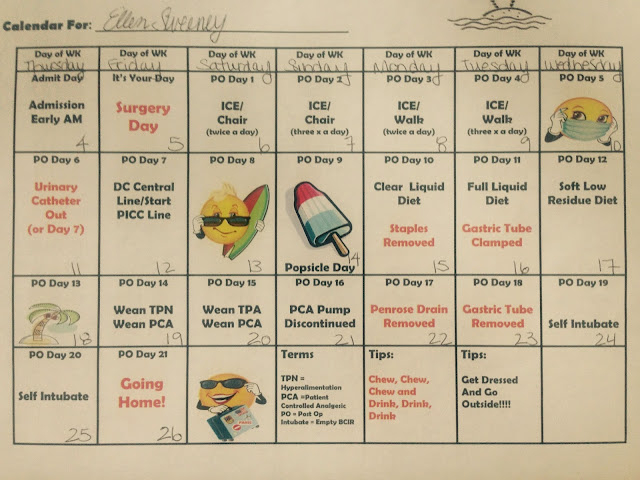 At this time next week, I will be flying to Tampa, Florida, in preparation for my BCIR surgery on June 5th.  My boyfriend and I are leaving Philly on June 2nd to spend two days in St. Petersburg before my admission day.  We splurged on a nice hotel on Treasure Island overlooking the Gulf of Mexico.  I'm hoping these two days will be relaxing and I can squeeze whatever possible enjoyment I can before the craziness that will ensue over the rest of June.  Over the last couple of weeks I've been anxious, petrified, and excited all at once.  The day I got my admission packet in the mail I burst into tears after I opened it and read everything.  I consider myself a badass when it comes to this stuff, but when I saw it all on paper it overwhelmed me.

If any of the above makes sense to you, it will give you an idea of how my days will be spent.  It's helpful to have my daily goals in mind ahead of time.  Popsicle day definitely looks like it will get me through the first week.  SERIOUSLY.  That popsicle will look like filet after not eating for 10+ days.  What I'm not looking forward to?  That rather than previous surgeries, my wound will be sealed with staples.  This means that my incision will likely not be as "nice" as it looks now since the last surgery that closed my wound with fancy glue.  Also, the removal of the penrose drain because it fucking hurts and it will be done the day AFTER I'm removed from IV pain meds.  I've never had a gastric tube but I can't imagine the removal of that will be fun.

So what will my life look like when I go home?  A lot of "work".

My first week, and two days before discharge, I will empty my pouch ("intubate") every two hours during waking hours.  I will have to get up at least once in the middle of my sleep to drain.

You get the point.  By the seventh week, I should only have to intubate every 8 hours.  Three to four times a day will be expected.

So for now, baby steps.  Expect me to post a selfie on popsicle day.  Until then...back to stuffing my face.
Posted by Ellen at 20:40 No comments:

Well, it's official.  In 24 days, I will be having surgery in St. Petersburg, Florida at the Continent Ostomy Center at the Palms of Pasadena Hospital.

The surgery itself, called the BCIR, or Barnett Continent Ileostomy Reservoir, is a modified version of a K-pouch, which has been performed for decades as an alternative to an external appliance.  Since my ostomy revision two or three? years ago, I began researching ostomy specialists.  I figured there had to be a surgeon who was well known for creating high functioning stomas (yes, there is a lot that goes into it).  Then I stumbled upon the K-pouch surgery and then the BCIR.

After my stoma revision surgery did not exactly improve my quality of life to the extent I wanted it to, I contacted the Continent Ostomy Center in Florida because they are the most reputable, well known, and well versed in the surgery.  The surgeon there was trained by Dr. Barnett, who modified the K pouch to his own version which improved its functionality.  At the time I initially contacted the hospital in Florida they wanted me to have an IBD diagnostic test done to determine once and for all which type of IBD I have; Crohn's or Colitis.  I ended up ignoring the test simply because I had a lot on my plate at the time between a full-time work and school schedule.

In the last month or two, a whirlwind of circumstances told me that now was the right time to see if I was a candidate for the surgery.  After having the IBD diagnostic test done, I consulted with the surgeon in Florida and a Californian surgeon who is the only other surgeon in the US who performs the BCIR.  They both determined that it was safe to proceed with surgery because the test came back "inconclusive" for IBD.  What this means is that they were more willing to proceed based off the fact that for thirteen years my small bowel has never been diseased.  If you choose to read more about the surgery, you will understand why that is important.

So yes.  On June 2, my boyfriend and I will fly down to Tampa and check into a beachfront hotel on Treasure Island in St. Petersburg, Florida.  The other part of this story is that since the surgery is so specialized I have to spend 21 days in the hospital.  So with that in mind I figured I might as well get a few good days of relaxation before being sliced open.  On June 4th, they will admit me to the hospital so they can administer my bowel prep (yay!) and run other pre-op routine tests.  Friday morning, June 5th, will be my surgery.

It will be a long, difficult, and life adjusting period for me.  The hospital wing I will be residing in for those 21 days is similar to a hotel room and my friends/guests are encouraged to stay overnight for support.  On Sunday my boyfriend has to leave me to travel for work.  After that my mom will come for a week, then my brother, and then my best friend in the whole world, Claire.

Thankfully work has been incredibly supportive.  I have a great network of friends and family.  I have an amazing boyfriend who has kept me laughing and supported me through every step of the process.  I will try to share more on here once I am down in St. Pete.  For now, send good vibes my way!