I was extremely spoiled last week. My family has had a couple of Phillies ticket packages dating back to the last couple of seasons at Veterans stadium. So through the years at Citizens Bank Park we've always had the opportunity to purchase playoff tickets before they go on sale to the general public. Now, my sister being the responsible, positive person she is has always believed the Phillies were bound to go to the playoffs each year. And trust me, we were all happy she believed in them come the 2007 season and particularly, 2008 when everyone wondered how we got suck great seats without paying an arm and a leg for them.
So throughout the 2007 and 2008 seasons I saw some remarkable games and even more remarkable playoff appearances. Unfortunately last year I was too sick to attend so you can imagine how excited I was this year. I probably attended over twenty games this season, which I will shamefully admit, isn't as fun as it sounds. I love baseball, but going to two games a week gets old, and expensive.
And then last week happened. My sister and her husband were supposed to take Wednesday's game, while my brother and I would attend Friday. But being that my nephew is only a month old, my sister decided to lend me her hubby for the night and let me go to the game. And we all know what happened. It was truly an amazing thing to witness and I am so glad I got to experience something so incredible. Here is a shot from our seats after everyone was going to rush Roy on the field and the fireworks were going off. Amazing. 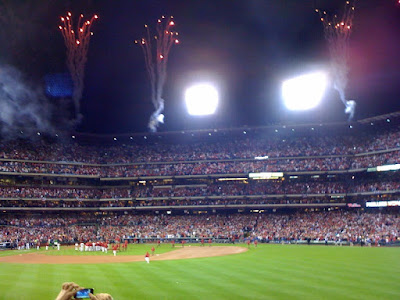 As if that wasn't enough, I got to go with my brother on Friday and witness the Reds collapse from right field again. The misplayed ball by Jay Bruce occurred right in front of us. I kinda felt bad for him but the crowd reaction was pretty hilarious. And I gotta post this pic because of my shirt, taken at McFaddens before the game. 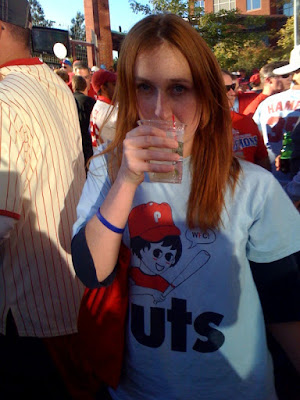 And this picture, just because my nephew is the cutest man in the world! 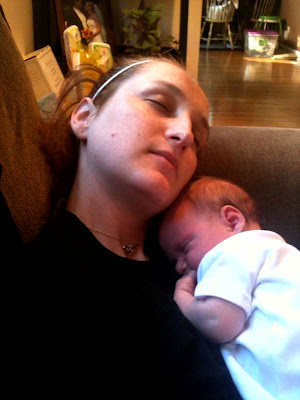 Oh geez....he really is so cute. I wanna hold him.