Got your attention with that blog title, didn't I? Well, my non-Crohn's afflicted readers (which is a lot of you) will certainly be educated a bit on this topic.

I don't know when I first came across the term 'phantom rectum' but I know it was years ago, back when I had my colostomy in '05. Basically, phantom rectum is exactly as it sounds; pain in the area where your rectum used to be, or an uncomfortable feeling of urgency that one experienced BEFORE they had their rectum removed. JEEZE. As if needing your rectum removed isn't bad enough, now people have to still feel like it's there?

I admit I did think about this before surgery because it seemed to be a topic discussed more than you would think on ostomy message boards. I wasn't overly concerned with it, though.

I am not sure what I am feeling is phantom rectum but I have certainly had a couple of moments in the past month where I thought my rectum was still there, but it was usually because the activity I was doing used to illicit urgency pre-surgery.

For instance, pre-surgery, every effing time I stood up I would experience urgency which was usually followed by something coming out of my ass whether it was blood, mucous, poo, or pieces of food (sorry people). So, every once in a while I'll stand up and feel that rush towards my rectum but nothing happens! It's a miracle.

I feel like my shopping experiences trigger these feelings of phantom rectum, too. Shopping was always such a terrible experience because mentally I knew there's not always readily available bathrooms. And if there were, I'd have to interrupt my excursion to find it and once I got there and back I was so damn frustrated I didn't want to shop anymore. I swear anytime I'd walk into a Target or a mall my rectum would wake up and say, "Not so fast".

Today I was going out with my mom and as I stood up I felt sick. It was a combination of that sensation in my rear end and me thinking, "Do I really wanna go out?" For one TINY second I forgot that I could, indeed, leave the house for as long as I wanted and I would be fine.

In conclusion, I don't know if what I am experiencing is phantom rectum because it's not painful like most describe. It's nothing I need pain killers for or something I feel for more than a split second. I know that some of is probably a result of my brain being conditioned to expect a rush of matter towards my butt every single time I stand up.

The greatest part in all of this is knowing that no matter what discomfort I may experience for a few seconds, I know that it is only just that--a few seconds. In the context of Crohn's, a few seconds is nothing. I can deal with a few seconds. Bring it on!

Me and Braden, my nephew, who I spent my days with : 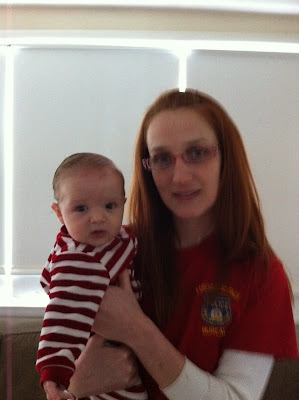