So after pretty much harassing my doctors office with phone calls the past 3 days, I finally received a call back about the Humira insurance approval.  It was approved!  There's too many damn people to deal with in that doctors office.
The good news: I will be able to pick up Humira at my pharmacy later today or tomorrow.  It's just like any other script in that regard.
The retarded, effed up, "I don't get it" news: I still haven't received a phone call from the home healthcare company that is supposed to come out and show me how to inject myself.  The nurse at Penn said I probably won't be scheduled until next week.  Bummer.
After researching online and even according to Humira's web site, it doesn't appear that home healthcare visits are a standard practice for patients receiving it.  They bombarded me with literature, dvds, and even a sample injection "pen".  They have a hotline for people to call if they have questions about injection.  So really, why the eff did I even look at these things when some lady is just going to show me how to do it anyway?  Seriously, the "pen" they have designed for injection has a pen-like nub at the top, you press it, and THERE, it's in.  On top of that, my mom is nurse who administers these things to patients daily. It's frustrating because I've been through SO much in terms of taking care of myself after surgeries, etc.  At this point, an injection is a joke.
So now I'll play the next waiting game (it never ends) and I'll probably open my fridge up 20 times a day to look at my box of Humira chillin in the fridge until I can actually use it.  When the home healthcare nurse calls, I'm going to inquire if it's possible for me to give the injection myself.  Maybe I can finagle my way out of her coming and get this sucker in me before the weekend.
Here is the pen: 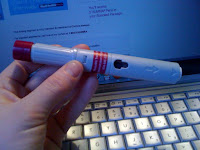 The top red part is what you press when the white part is against your stomach or thigh.  See the nice arrow and everything?  It's pretty much idiot-proof.  Well maybe I shouldn't speak too soon...
Posted by Ellen at 11:28